Another Week brings another DCDT Book Review because, in all honesty, reading books is about all that is left to do right now.  The MoMFC is only 12 weeks away from D-Day, and we’re pretty much in cruise control at this point in time.  So without further ado… 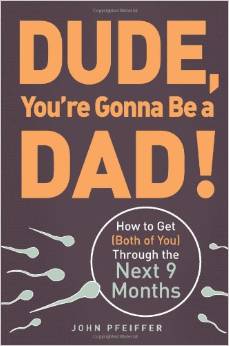 The latest read through was the book “Dude, You’re Gonna Be a Dad“, written by John Pfeiffer.  After last week’s book review, this book should be a breath of fresh air for any aspiring Dad-to-be.  It should speak volumes for the fact that this was one of the first instructional books I’ve ever read that I actually wasn’t able to put down.  I managed to breeze through this reading in just a few days, retain a large amount of the information, and find that a lot of the things mentioned in this book have either been
a) brought up in a doctor’s appointment

b) provided great questions to ask the doctor.

One of the better features of this book was the vast collection of quotes about fatherhood and becoming a father.  It’s not often in society that fathers really get recognized this early in the stage of baby-making/having.  We’re pretty much sideline reporters and athletic supporters, so to have inspirational quotes thrown my way was something that was not only appreciated, but a great addition to a wonderful book (I’ll even end with one of my favorites).

The humor in this book was also a great part of this reading.  Instead of the in-your-face, lame joking that was found in “What to Expect When Your Wife Is Expanding“, this book was actually informative through humor, rather than a random bit of information mixed in with forced comedy.

It’s tough to review a book that is good, which is why I’m struggling so much to write this review.  It was so great, I’m actually looking forward to reading the sequel, “Dude, You’re a Dad!: How to Get (All of You) Through Your Baby’s First Year.  If you’re a soon-to-be Dad, I can’t recommend this book as a great starting point to your fatherly knowledge.

Sherman made the terrible discovery that men make about their fathers sooner or later . . . that the man before him was not an aging father but a boy, a boy much like himself, a boy who grew up and had a child of his own and, as best he could, out of a sense of duty and, perhaps love, adopted a role called Being a Father so that his child would have something mythical and infinitely important: a Protector, who would keep a lid on all the chaotic and catastrophic possibilities of life. —Tom Wolfe, The Bonfire of the Vanities